You are the star athlete who leads the team to victory in football, basketball, and baseball games.
©Best 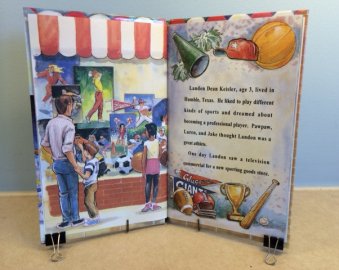 Tevin Powers, age 10,lived in Grapecreek, Texas. He liked to play different kinds of sports and dreamed about becoming a professional player. Garrett, Ty and Uncle Roy thought Tevin was a great athlete.

One day Tevin was in a television commercial for a new sportinggoods store.

The next day, Tevin went to the store. He walkedover to a pile of baseball bats. He tried to hold the bat just like the professional player in the poster.

Tevin closed his eyes. Suddenly, he was actually playing in the World Series!

The baseball stadium was packed like sardines. The croud was doing the wave and flying colorful banners in the air.

The bases were loaded. The team depended on Tevin toscore the winning run. He held the bat tight as the mean-looking pitcher threw a curve ball. Tevin swung and hit the ball.

The ball flew up, up, up in the air! It kept on going all the way out of the ballpark!

"Holy cow, it's a grand slam!" the announcer yelled.

Tevin thought, "Gee whiz, Garrett, Ty and Uncle Roy would be proud of me!" Tevin dropped the bat to run the bases and.

Tevin was back in the sporting goods store. He was a little confused, so he walked across the aisle to a display of basketballs. He began to dribble a basketball.In an instant, Tevin was playing in the finals.

The basketball stands were jammed with people. Ty and Uncle Roy sat at center courtchanting, "Sink it! Sink it!"

Tevin looked at the scoreboard. His team was one point behind. There were only seconds left in the game.

Tevin dribbled across the court, then quickly slam dunked the ball. It zoomed straightthrough the basket!

The team players lifted Tevin on their shoulders.When they put him down, he was onceagain at the sporting goods store.

Tevin picked up a football and began to watch the Super Bowl on a big screen TV.

Suddenly, he was the was the quarterback on the field. There were two seconds left in the game and his team was five points behind. Three enormous linemen from the other team were heading straight for Tevin.

Tevin managed to spin out of the tackle and avoid a sack. He ran twenty yards, forty yards, then fifty! Touchdown!

Tevin was so happy he threw the football in the air,and did a little victory dance. Tevin was given a beautiful trophy and named theMVP of the year.

On the way to the exit, he passed a display of trophies and thought, "If I practicereally hard, my dreams of being a professional athlete really could come true. I can't wait to tell Garrett, Ty and Uncle Roy about my wonderful sports adventure."