Are you ready for some football? A cool fall breeze, leaves changing colors and Autumn right around the corner can only mean one thing - FOOTBALL SEASON. Here comes the passes, the runs, the catches, the blocks and the tackles for your little FOOTBALL HERO!

Your child can personally be in the game with their favorite team and players and lead them to a stunning victory as his friends and a stadium full of fans cheer him on!!!  This book is a great gift for someone who plays the sport or someone who just likes to watch from the sidelines. Great for Children or Adults!
©Best 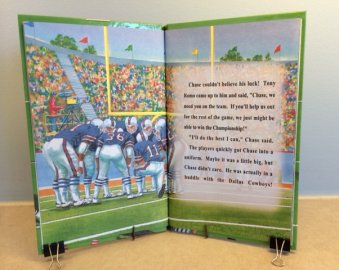 Best of all, the Denver Broncos had made it to the Championship, and they were going to play against the Dallas Cowboys. The game was going to start in just a few minutes! Garrett was waiting for Tevin, Ty and Kelsey to join him in watching the game.

The crowd in the stadium sang the National Anthem, then gave a mighty cheer just as the game was about to start. But Garrett was getting sleepy.

"I've just got to stay awake for the Championship game," thought Garrett as he watched the coin toss. But Garrett was really tired, and he slowly fell into a deep sleep.

Then the strangest thing happened. As if by magic, Garrett suddenly found himself at the football stadium! The Championship was being played right in front of his eyes!

He heard the loudspeaker. "Attention ladies and gentlemen," the announcer called out. "The Denver Broncos just asked if Garrett Cole Powers will join them for this game!"

Garrett couldn't believe his luck! John Elway came up to him and said, "Garrett, we need you on the team. If you'll help us out for the rest of the game, we just might be able to win the Championship!"

The players quickly got Garrett into a uniform. Maybe it was a little big, but

Garrett didn't care. He was actually in a huddle with the Denver Broncos!

Garrett joined the Denver Broncos on the line of scrimmage. As he was facing the Dallas Cowboys, he remembered the quarterback saying to him, "I want you to go long and to the right, and then I'm going to pass the ball to you."

"I sure wish Tevin, Ty, and Kelsey could see me now," thought Garrett to himself excitedly.

Garrett ran as hard as he could. The ball seemed to sail through the air forever. Garrett caught it and ran as fast as he could. The Dallas Cowboys tried to tackle him, but he was too fast!

The crowd went wild as Garrett scored a touchdown.

Later in the game, the score became tied. John Elway told Garrett that the coach wanted to see him.

"Garrett we all know you can catch and run," the coach said. "But if you can kick a field goal, we can win this game."

The players ran back out to the field. The crowd grew silent.

The ball was snapped. Garrett kicked that ball with all his strength. It flew

through the air and sailed right over the goal post! Garrett had scored the winning points! The Denver Broncos had won the game!

It was like a dream! The other players hoisted Garrett above their shoulders and marched him around the football field. Garrett heard the loudspeaker announce. "Garrett Cole Powers has been chosen the Most Valuable Player today."

"But I was just about to get my trophy for the Most Valuable Player Award," Garrett murmured as he rubbed the sleep out of his eyes.

"You'll always be the Most Valuable Player around here," Tevin, Ty, and Kelsey replied. "Now let's make some popcorn and watch the game!"