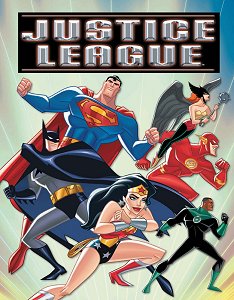 The Evil Gorilla Grodd is on the loose at the new theme park that just opened in your hometown. He is causing trouble and let all the wild animals loose. It will take the combined forces of the World's Finest super heroes to stop him. Your child will team up with Batman, Superman, Wonder Woman and the rest of the Justice League on an personalized adventure that will be fun for the entire family!!! Your child will become the best superhero around when he helps capture Gorilla Grodd and saves the park.

Great personalized book for adults too! 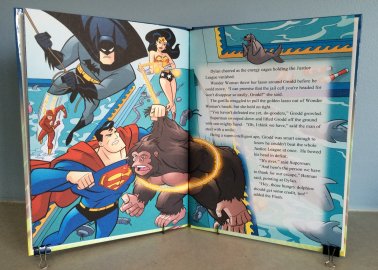 Teams up with the Justice League to stop Gorilla Grodd

To our Little "Super Hero"

The greatest super heroes of all time have joined together to battle the forces of evil as - the Justice League! One of the group's most dangerous foes is the super-intelligent gorilla named Grodd. A renegade scientist from a hidden city of intelligent apes, Grodd possesses enormous physical strength and a powerful mind. Only the Justice League stands between this diabolical villain and his goal to conquer all mankind!

Kelsey Shaye Whiting, age 4, was thrilled to be one of the first visitors at The Adventure Zone, an incredible new theme park that just opened near Midland, Texas.

Kelsey rode the park's Jungle Ride and saw ferocious wild animals. The next attraction was the water show. Four dolphins jumped right over the audience's heads to get to their lunch! Kelsey couldn't wait to come back and show Garrett, Tevin, and Heath the amazing dolphins.

But Kelsey's perfect day was ruined when a panic started in the park.

"What's going on?" Kelsey asked a boy hurrying by.

"The animals are loose! Run for your life!" shouted the boy.

Kelsey tried to get out of the park, but there was a herd of elephants blocking the path to the main gates. Kelsey decided she needed to find a place to hide - fast!

Kelsey found a bush to hide behind and watched as a rhinoceros rumbled past. She was amazed when the rhino suddenly began to rise up into the air. Kelsey saw Superman lifting the huge animal over his head and Kelsey realized that the Justice League had come to the rescue!

Wonder Woman tossed her magic lasso around the neck of an alligator. "How could all these animals have escaped at once?" she asked.

"You can bet there's some kind of monkey business going on," joked the Flash.

"Whatever it is, I'll be back as soon as I corral the giraffe and big cats!" Green Lantern shouted.

"And who better than me to round up these rare golden eagles?" cried Hawkgirl.

Batman studied the locks on the animal's cages and discovered that the stampede was no accident. "The locks on these cages have been cut with some kind of laser beam," said the Caped Crusader. "We need to find out who did this - and why."

A booming voice rang out from the side of the mountain. "Can it be that you don't recognize the hand of your old enemy Grodd at work here, Batman?"

"Actually, I did. But I wanted you to show yourself," said Batman.

"Only so that I can crush you all!" shouted Grodd. The villainous gorilla began hurling passenger cars from the Jungle Ride down the side of the mountain. One of them was heading straight at Kelsey! But before she could react, a red and yellow blur swept her out of the way.

"Welcome aboard the Flash express. Next stop, safety!" said the Flash as he carried Kelsey away from the falling passenger cars.

Superman and Wonder Woman flew straight to the top of the mountain. They could see Grodd leaping down the other side.

"Don't let him escape!" Wonder Woman shouted as she soared over the mountaintop.

In the blink of an eye, the Flash dropped Kelsey off out of harm's way. "I've got to run," he said. "There's another monkey that needs to be put back in his cage!"

As the Flash sped away toward the dolphin pools, Kelsey decided to follow him. The water show was exciting, but seeing the Justice League battle Grodd was an act that Kelsey did not want to miss!

Superman and Wonder Woman were already closing in on their foe. Grodd fired laser blasts at his enemies as they swooped down toward him.

"All of you will fall before the power of Grodd!" he boasted.

Batman hurried to catch up with his teammates. "Don't forget how clever Grodd is," he warned. "We don't know what kind of surprises he might have in store for us!"

Batman was right - Grodd had lured the Justice League into a trap! He activated a machine that shot out a powerful beam of light. In an instant, the beam created an energy cage around each of the heroes.

Superman and Wonder Woman tried with all their might to break out of the cages, but it was no use.

"Save your strength," Batman told his teammates. "Grodd's machine is absorbing every bit of power you throw against the cages. You're just making them stronger!"

Kelsey reached the dolphin pools, where she could hear Grodd's sinister voice. "Yes, Batman. What better way to trap super heroes than to use their own powers against them! And now that there is no one to defend it, the entire world of man will bow to Grodd!"

Kelsey ducked behind a large barrel and tried to think of a way to help the Justice League. But what could she do to stop an evil super gorilla?

Kelsey noticed an awful smell coming from the barrel she was hiding behind. It was filled with fish for the dolphins. That gave Kelsey a great idea!

"Once I have conquered this world, all of mankind will serve me!" said Grodd. He enjoyed gloating over his prisoners so much that he didn't notice Kelsey rolling the barrel of fish toward the edge of the pool. But the dolphins in the other pool certainly noticed! They knew from experience that the barrel was full of their favorite food.

Kelsey spilled the whole barrel of fish into the pool. "Dinner time! Come and get it!" she said. The hungry dolphins immediately leaped out of their pool. The only thing standing between them and a delicious dinner was Grodd's machine, so the dolphins smashed right through it to get to their fish!

Grodd was taken completely by surprise. "No! My energy cages are dissolving!" he cried.

Wonder Woman threw her lasso around Grodd before he could move. "I can promise that the jail cell you're headed for won't disappear so easily, Grodd!" she said.

The gorilla struggled to pull the golden lasso out of Wonder Woman's hands, but she held on tight.

"You haven't defeated me yet, do-gooders," Grodd Growled.

Superman swooped down and lifted Grodd off the ground with one mighty hand. "Oh, I think we have," said the man of steel with a smile.

Being a super-intelligent ape, Grodd was smart enough to know he couldn't beat the whole Justice League at once. He bowed his head in defeat.

"It's over," said Superman.

"And here's the person we have to thank for our escape," Batman said, pointing at Kelsey.

"Hey, those hungry dolphins should get some credit, too!" added the Flash.

The Justice League made sure that Grodd was locked away where he would never threaten anyone again. Then they flew back to Midland, Texas and picked up Kelsey in their space ship, the Javelin-7.

"We couldn't have stopped Grodd without your help, Kelsey," said Superman. "So how about a quick spin around the Earth as a reward?"

Soon, Kelsey was rocketing through space with the Justice League. They flew past the Watchtower, the team's space station headquarters, and then circled around the moon.

"I wish Garrett, Tevin, and Heath could see this!" Kelsey said.

"You can tell them all about it when we land at The Adventure Zone," said Batman. "We invited everyone to meet you there."

Sure enough, when they reached the park, Garrett, Tevin, and Heath were waiting for Kelsey. The Justice League joined in a big parade held in Kelsey's honor. When it was over, they rode all the rides and sat through every show right by Kelsey's side!