Who says school is boring? Not when you have to solve the mystery of spilled milk and strange noises coming from the school lockers.
©Best 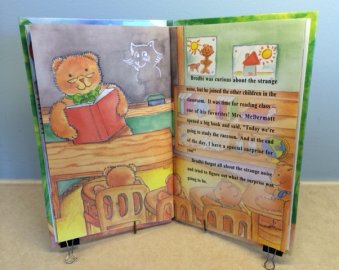 has fun at school

"Today is going to be so much fun," thought Jessica Lynn Smith, age 5, of Plymouth, Michigan. "That's because today, I get to go to Johnson Elementary."

Earlier that morning Jessie had dressed quickly and rushed through her breakfast.

"Slow down, Jessie," Jenny, Allison, and Britney said laughingly. Jessie seemed more excited now then she had been before.

When Jessie arrived at Johnson Elementary, she ran up the steps to catch up with the other children.

Jessie ran to her very own locker. As she opened the locker, Jessie thought she heard a rustling inside.

"Is there something inside my locker?" Jessie wonder. "what could it be?"

Jessie decided to close her locker and investigate the noise later.

Jessie was curious about the strange noise, but she joined the other children in the classroom. It was time for reading class -- one of her favorites! Mrs. Baker opened a big book and said, "today we're going to study the raccoon. And at the end of the day, I have a special surprise for you!"

Jessie forgot all about the strange noise and tried to figure out what the surprise was going to be.

After learning all about raccoons, the children went to the art center.

"I want everyone to paint a picture of a raccoon," said Mrs. Baker.

"Jessie, that is a wonderful painting of a raccoon," said Mrs. Baker. "You are a very talented artist."

Jessie couldn't wait to take the painting home and show it to Jenny, Allison, and Britney.

During lunchtime, Jessie sat at the table with all her very best friends. They all laughed and shared stories about their summer vacations.

Suddenly, Jessie felt something bump against her leg. Then the table gave a little shake, and a pitcher of milk spilled all over the table.

There are a lot of strange things happening today," thought Jessie. Just then, the bell rang. It was time for music class. There were so many musical instruments from which to choose. Jessie liked the tambourines the best. Mrs. Baker taught the children a special song about a raccoon.

As Jessie played her tambourines, she kept thinking about the big surprise Mrs. Baker had for the children at the end of the day.

Now it was time for Jessie to go to science class. But when Jessie got to the classroom, she couldn't find her lab goggles anywhere.

"Where could they be?" wondered Jessie as she looked under the desk.

Mrs. Baker was talking. "Pay attention, children. I'm going to reveal my surprise." The teacher brought out a big box with a cloth covering in.

When Mrs. Baker removed the cloth, there was nothing but a large, empty cage!

"The raccoon is missing," gasped Mrs. Baker. "It must be running around loose in Johnson Elementary."

Just then, Jessie thought about the noise she had heard in her locker. Jessie also remembered what had happened in the lunchroom today.

"I'll be right back," said Jessie as she quickly ran from the room.

Jessie knew just where to go. She ran right over to the lunchroom. As she listened at the door, Jessie heard some strange sounds coming from inside.

Even though it was dark in the room, Jessie wasn't afraid. She opened the door and saw the strangest site in the world. A baby raccoon was wearing her goggles! And that's not all. The raccoon was eating a leftover sandwich.

"look what I found," said Jessie with a big smile as she brought her new fuzzy friend back into the classroom.

The other children gave a big cheer for Jessie.

"This really has been the best first day of school ever," said Jessie. "I was right when I told Jenny, Allison and Britney that school is fun!"

A special gift from